Dory was very satisfied with her birthday party. It was probably the greatest day of her life. For the first time ever, she spent a night out of her house. She danced and tried some alcohol, only to find out  it wasn’t really her thing – it made the voices louder.

But none of those activities were as awesome as a fact that Alfred walked her home.

So he just skipped the words completely and kissed her. Actually freaking kissed her!

Dory was so happy and shocked and stunned and everything.

Could it be happening? Could it be possible that he liked me back the entire time?

She had no idea what to say. But for some inexplainable reason she remembered a conspiracy theory about Diabolical Detonators of Twinbrook and decided to share her thoughts about that. 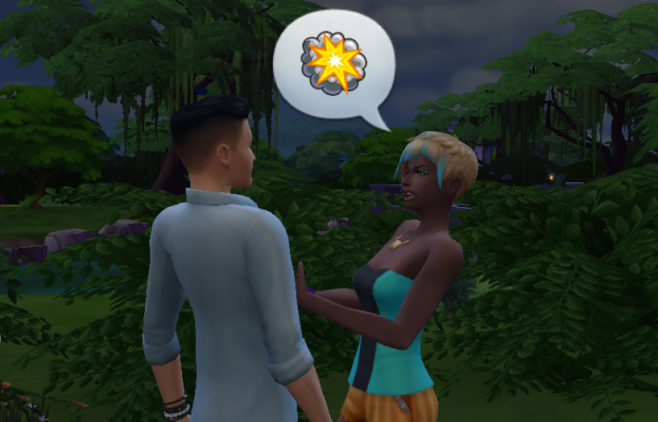 “And sometimes, it just exloded right in their face!”

But Alfred knew how to calm her down.

“It’s okay, Dory, I feel ovewhelmed, too,” he said quietly and kissed her cheek softly.

Overwhelmed was definitely the right word for it. Dory’s head was spinning. She couldn’t believe her luck. Known words couldn’t express how she felt. 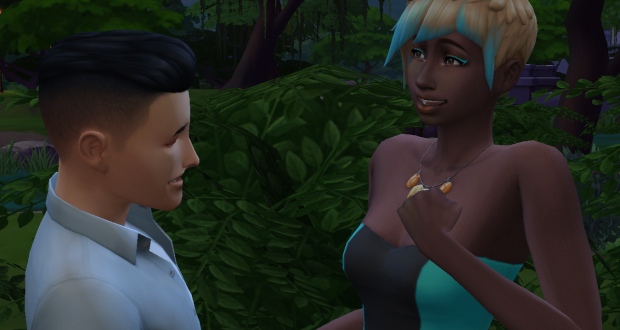 So she went for the unkown ones instead. They made no sense to Alfred, but he knew her good enough to tell that she felt the same.

Being openly in love was very liberating. Dory was thrilled to be able to express her affection for him whenever she wanted. And they started to spend even more time together than before, which was also nice.

They usually spent their days in Dory’s room, reading together, listening to music or dancing to sappy 90s love songs. They talked about aliens and garden gnomes and laughed for hours at cat gifs and movie references about cheese and other random stuff.

And one of these afternoons, Dory got an idea.

“Did you know that my sisters are working late today? They won’t be back until 11 p.m.”

She said it with the most playful tone she could come up with and she stared eloquently at her beau until he understood and followed her to the room with a double bed.

After the fun, they sat together on Melia’s bed and shared their impression of what just happened. 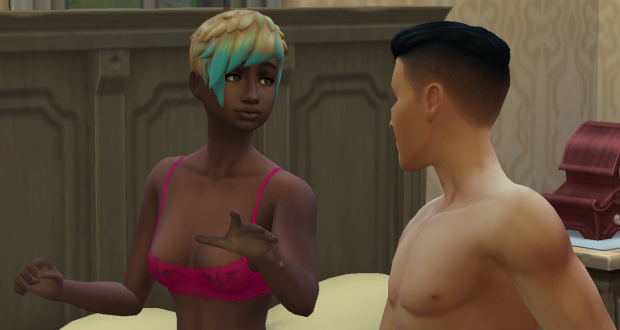 D: “That was pretty something!”

D: “Wouldn’t it be great if we could do that for the rest of our lives?” 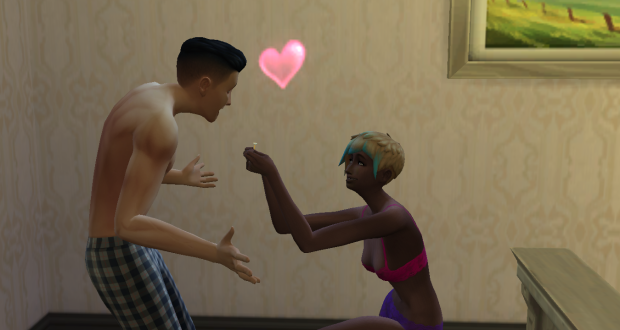 A: “Is that a vending machine ring with Donald Duck stamp?”

D: “Yeah, it’s my favourite. My mom bought it for me when I was six and I wore it from that moment untill now.” 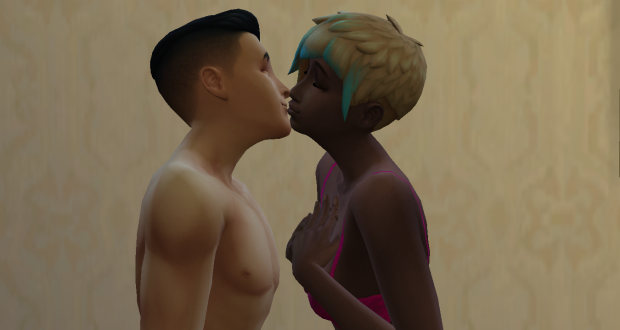 They just smiled with excitement and laughed about the silliness of it all. It took a few moments for them to calm down and think about practical things.

A: “So, when would you like to do this? After graduation? After college? After becoming financially independent? After kids are old enough to attend?” 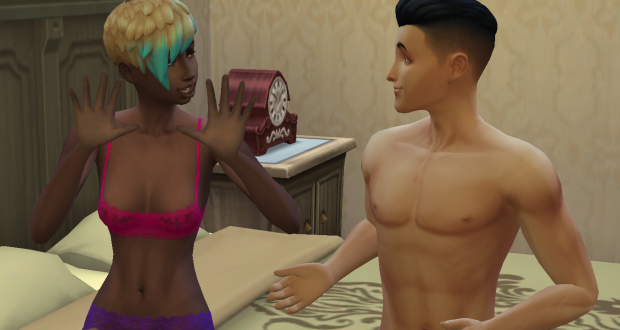 D: “How about…tomorrow? I have nothing else to do.”

D: “Why are you asking that? You already know I am! Is that a problem?”

After that, Alfred rushed home to tell his mom and uncle, while Dory impatiently waited around for her sisters to come home and help her with preparations.

Melia almost got an heart-attack when she heard the news. She presented Dory with at least million reasons to stop the madness and think it through, but Dory was having none of it and every time Melia tried to talk to her, she just said: “If it’s okay for Millie to run away with a stranger she barely knows and even get pregnant in the process, it’s perfectly okay for me to marry my best friend.”

And there was nothing Melia could say to that. It was Dory’s life, after all. So she agreed to let it go and help with the wedding menu instead.

“Who knows, maybe my lobster rolls and rosemary-roasted lamb chops with apricot salsa will save the day.”

Devi decided to talk some sense into her little sister, too. She opted for calmer and less emotional approach.

Devi: “Are you completely sure about this move?” 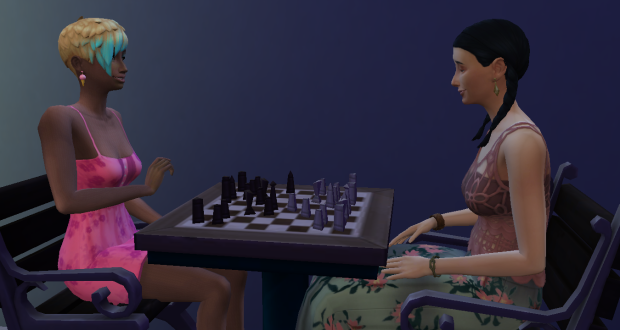 Dory: “If you’re talking about the chess, then yes. Also, checkmate!” 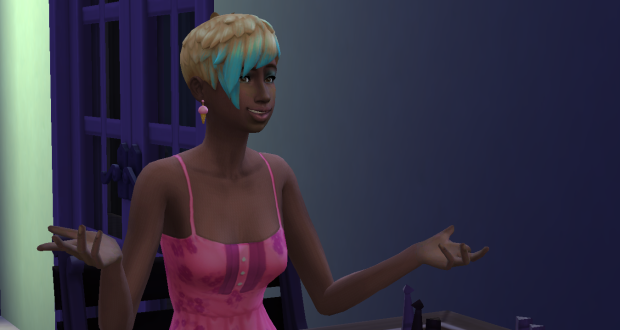 “And if you’re talking about the wedding – I have no reason to doubt it. He’s the only person in the world who doesn’t mind me when I’m myself.” 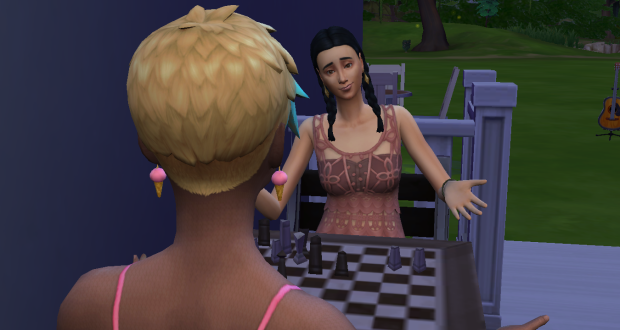 “You don’t need a man – or anyone else for that matter – to be yourself, though.” 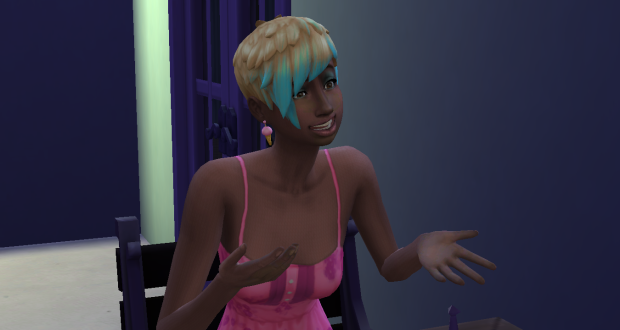 “Maybe not. But I want him in my life. And I love him. And he loves me back. What can possibly go wrong?”

“Dozens of things, actually. You can run across major differences between you and find yourselves unable to compromise on certain matters. Did you talk about your future studies and careers? Or where would you like to live? When is the right time to start a family? If ever? There are lots of things worth discussing.”

“Maybe you’re right. But we’ll have plenty of time to discuss it later. The rest of our lives, to be exact.”

And with that being said, Dory stood up and walked away with a determined look in her eyes.

Devi shook her head and laughed in defeat.