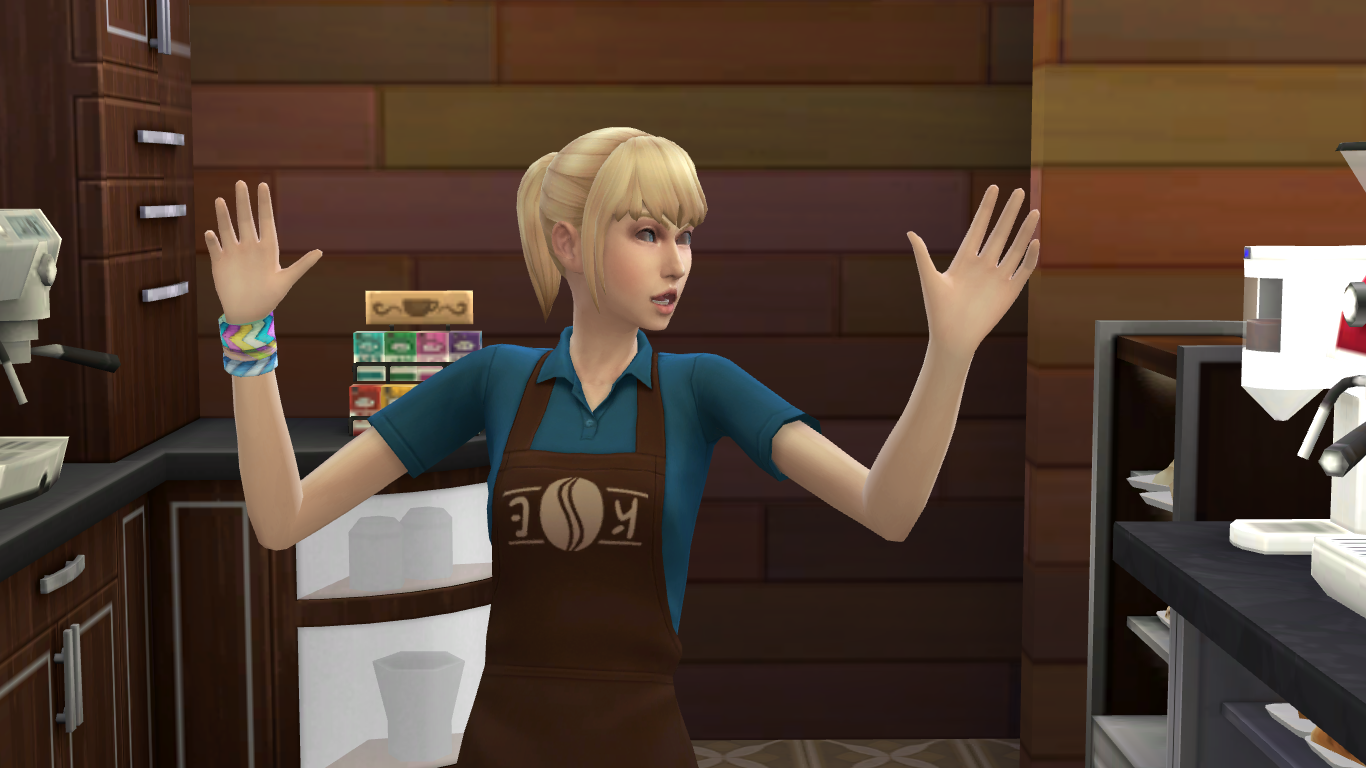 The blonde girl behind Etta almost screamed. Billie was the sweetest co-worker she could ever wish for, but she could be a real oddball sometimes.

“Guess WHO just walked through the door! Dante freakin’ Lothario!”

Etta’s heart did a backflip at the mere sound of his name. She looked up without realizing what she was doing and it was true. Dante stood right there in the middle of the café.

She smiled instictively when she saw him, but then she noticed a particularly attractive girl next to him and quickly came to her senses. Trying to sound as indefferent as possible, she turned her attention back to dirty dishes.

B: “So what?! He’s like… the hottest guy in school. Don’t act like you don’t have a crush on him. Everyone does. It’s human nature.”

Etta shrugged as she washed a hundredth mug that morning. Billie rolled her eyes at her lack of enthusiasm and went back to work. Mondays were always particularly busy and customers were quickly accumulating in front of the counter, forming a rowdy, nervous crowd.

Against her better judgement, Etta looked up and saw Dante standing at the end of the line. And he looked really good.

‘Damn it, Etta, get a grip or someone’s gonna notice just how plumming ridiculous you are.’

She managed to look away and decided to change filters in the coffee machine. It kept her focused for a while. At least until she overheard Billie taking Dante’s order. She tried to fight it but she couldn’t help herself. She looked up again, turning her head towards the sound of his voice.

He stood on the same spot as before, looking better than ever and Etta felt like her brain just melted.

‘Daaamn, I wish I was that coffee.’

Her wild train of thoughts was interrupted suddenly when the boy spoke.

He walked around the counter and sat on a bar stool there while Etta tried to contain the emotions she felt lately.

D: “Well, okay then. It’s just that you looked a little distracted for a second.”

‘You have no idea,’ she thought to herself, her heart beating louder than a marching band. She was really glad the café was crowded and noisy that day.

E: “Oh, I’m just tired. Please, don’t tell my boss you saw that. He wants us to be all smiley and pretty and fresh in front of customers.”

Etta would love to stand there forever and watch how his perfect lips formed perfect sounds into the perfect words he spoke, but unfortunately, Mondays were truly extremely busy and they’ve just run out of cocoa.

E:  “I’m sorry, Dante, but I gotta go. This place is a mess today and we need a few things from the stock room. We’ll talk later, okay?”

Dante just smiled and nodded. Etta sighed as she watched him leave, unable to take her eyes off him.

Billie’s voice brought Etta back to earth. And back to work.

“Uhm, your face? When you talked to him? It was lit up like a freaking Christmas tree!” 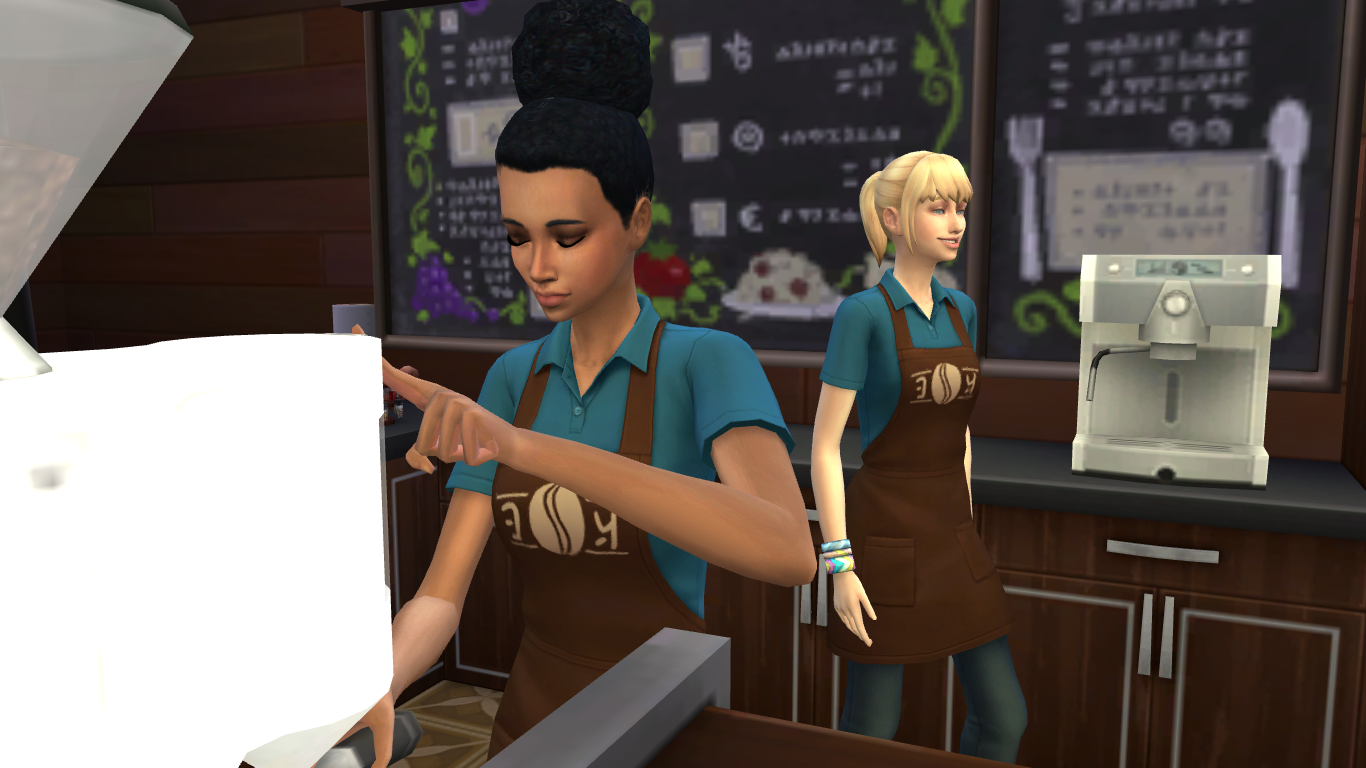 B: “Etta, look, I’m not dumb. I can recognize a crush when I see one. But hello! You talked to Dante Lothario! Did he ask you out or something?”

B: “Well, better be careful. Dante’s not the type who would say hello to a girl without a very good reason. And that reason is usually in her pants.”

The blonde girl didn’t stop talking, but Etta quickly got away and hid in the stock room so she couldn’t hear her.

Dante was notorious ladies’ man. Girls were crazy about him and he was more than okay with it. Rumours had it that it ran in their family – his grandfather Don used to be quite a playboy, too.

Etta later caught a glimpse of that girl of his, Michelle. Billie told her she was a freshman in college and a lingerie model. She surely looked like one.

She looked like a kind of girl Dante would actually date. ‘Unlike me,’ Etta sighed.

B: “I guess one could call her his girlfriend. But, well… guys like Dante don’t really have girlfriends. Just… you know.”

Billie had a lot of information about the girl. She kept talking about Michelle and her botox and surgeries and extentions for the next hour. Etta couldn’t wait for the shift to end.

But it didn’t bring her any relief. On her way to school, she ran into Aleksey.

Etta’s heart sank. She suspected the text wasn’t from Dante, but while it was anonymous she could at least fantasize about it. Now that she knew who sent it, the magic was gone.

“Sure. I didn’t know it was from you, though. But thanks.”

A: “Well, now you know. Surprise! Heh. So, hm… I was wondering. Would you like to grab a coffee with me?”

Etta was like paralyzed. She didn’t know what to do. Aleksey was so great. And kinda cute, too. But she had feelings for somebody else.

‘For somebody who will never be interested in me,’ she thought bitterly.

E: “I don’t know, Aleksey. I work at a coffee shop, you know. I had enough coffee today. And every other day, too, I guess.”

And with an excuse about running late, she turned around and rushed down the street, leaving the dissapointed boy behind.

She felt really bad for turning him down like that, but she had to. It would be unfair to go out with him, given the circumstances.

Lost in thoughts, she bumped into someone at the end of the street.

She immediately started apologizing when she realized it was her brother Amon with a satisfied, cocky smile on his face. Expecting him to mock her or tease her by pinching her cheecks or do some other childlish thing, she instinctively flinched.

But then she noticed someone else – a girl crawling out of a bushes behind him  and her cheecks reddened in the sudden realization.

She didn’t really know why, but she snapped.

“Seriously, Amon? This is how you spend your time now? Have some decency, geez. And next time, spare me the shame and choose a bush that is not right next to my workplace, for plum’s sake!”

And with that she stormed off. She couldn’t put her finger on what exactly bothered her the most – Billie’s trash talk about Dante, Aleksey’s inability to read between the lines or Amon’s absolute lack of class. But she was sure of one thing.

‘Boys are such morons.’